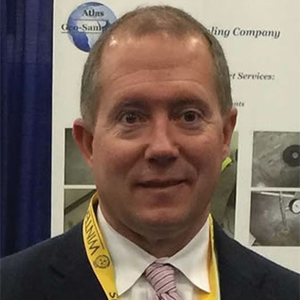 Total Vapor Solution is a boutique firm specializing in all aspects of vapor intrusion projects and was founded in 2017 by Jim Fineis P.G. Prior to opening Total Vapor Solutions, Mr. Fineis was the owner of Atlas Geo-Sampling Company. Between work contracted by Atlas Geo-Sampling and Total Vapor Solutions, Mr. Fineis has conducted vapor intrusion projects throughout the United States and internationally. He has conducted over 500 vapor intrusion investigations. Recent projects include the collection of sub-slab, indoor air, crawl space air and ambient air samples in approximately 110 homes around a former military base. Projects were completed in three countries and 30 + states over the past couple of years.

Additionally, Mr. Fineis has lectured at numerous conferences throughout the Southeastern United States on topics that include the appropriate installation methods for vapor intrusion sampling points, proper sample collection methods, and data analysis techniques. Over the past two years, Mr. Fineis has been an instructor on active and passive soil gas collection methods in the Hartman Environmental Geoscience vapor intrusion course.